All Super Lawn Trucks have a variety of options and features available.  Check out the packages below to find the solution that works for you! Remember, SLT can customize any truck to fit your specific needs! Fill out the form on the right/below to get a quote NOW!

***Due to the extremely limited availability of chassis units, we will only provide pricing on “current inventory” by calling our company at 1-866-923-0027***

Options Included in This Package :

Slide Out Folding Steps for Debris Dumper for All Trucks

This popular SLT Eco Series model is ready for assembly. We can add or delete options to customize your truck.

*Due to limited chassis inventory and rising materials costs, prices may change without notice. Chassis availability changes on a daily basis.

Options NOT included in this package:

Option: Delivery to your company $1.75/mile

Option: Include taxes and delivery with finance

*Due to limited chassis inventory, we expect this to be a 2022 delivery. Quote is good for 20 days or until inventory is sold out. We expect less than 5 chassis units that meet this spec available between now and Dec 2021.

Options Included in This Package :

This popular SLT Eco Series model is ready for assembly. We can add or delete options to customize your truck.

*Due to limited chassis inventory and rising materials costs, prices may change without notice. Chassis availability changes on a daily basis.

Options NOT included in this package:

Option: Delivery to your company $1.75/mile

Option: Include taxes and delivery with finance

*Due to limited chassis inventory, we expect this to be a 2022 delivery. Quote is good for 20 days or until inventory is sold out. We expect less than 5 chassis units that meet this spec available between now and Dec 2021. 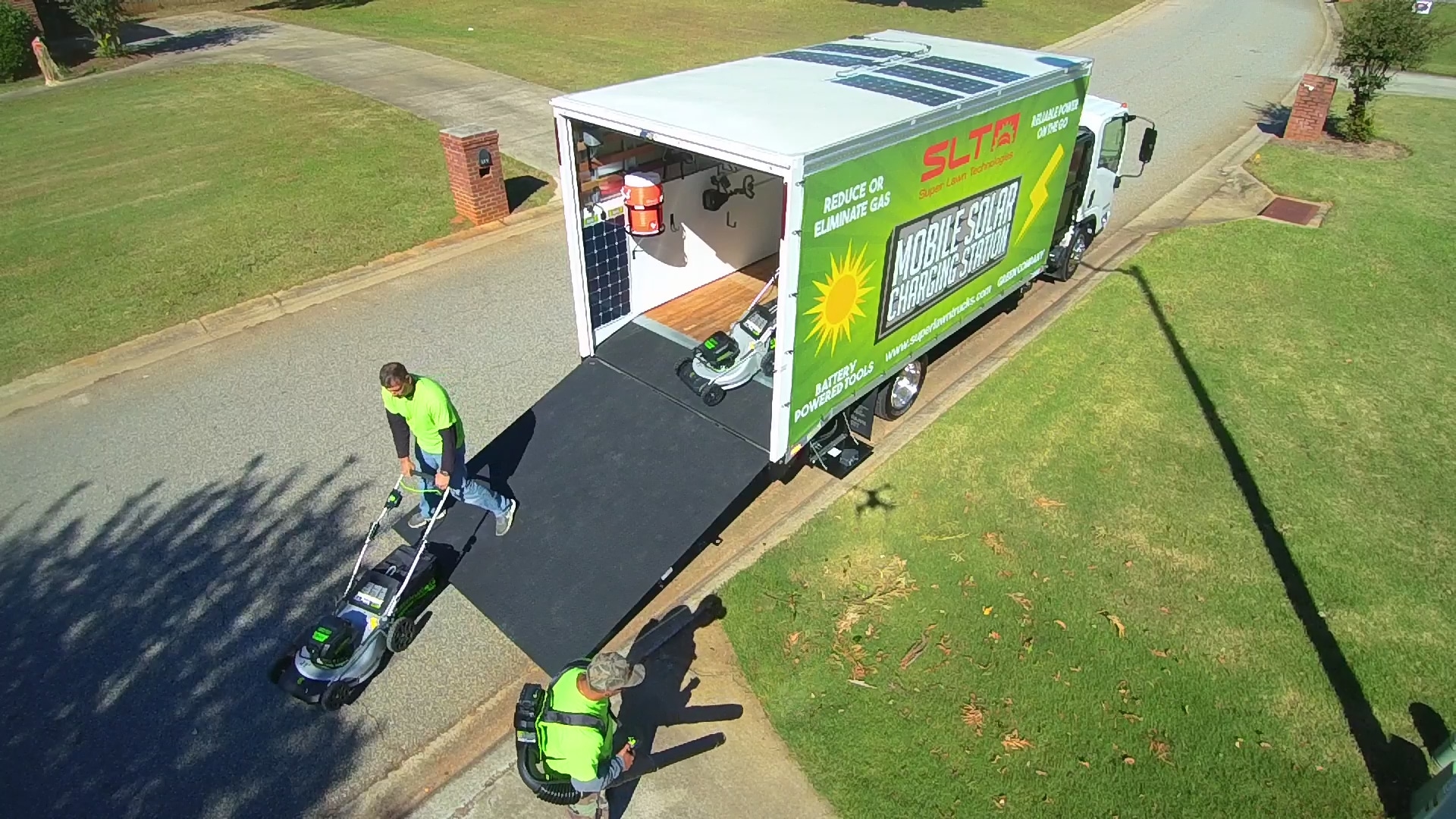 No more gas! No more spark plugs! No more noise! No more smoke and BEST of all NO MORE PULL CORDS!!

Battery powered tools and equipment cut through the day as quietly as a summer breeze. Finally, affordable, fast-power on the go is here!

Solar cells on top of state of the art Super Lawn Trucks harness the energy of the sun. Piped down to robust long lasting, high capacity batteries underneath the solar truck-power is transferred up to the core of this completely Mobile Solar Charging Station.

All Models are available with Crew or Single Cabs & Gas or Diesel.

This video will tell you what happens when you fill out the form!

1) Select the package that best suits your needs.
2) Place your deposit.
3) Apply for financing.

The roar over gas powered lawn and landscaping equipment has shaped the way professional landscapers work for decades. Lawn and landscape contractors now must face a new challenge.

Currently, more than 500 cities across the U-S have bans on gas powered lawn and landscape equipment. Many high paying, upscale landscaping maintenance contracts are being awarded to landscapers embracing the Lithium Revolution. Pioneers in the industry are investing in innovative technology to become the “Lithium Landscapers” using only battery powered lawn and landscaping power tools.

“Georgia Tech ‘s had a significant impact here at Super Lawn Technologies in a number of ways. Ramps for loading the vehicles is one of the big improvements that we’ve made. We’ve also focused on development of the solar cells that are placed on top of the truck that can be used to recharge the batteries for all of the electric equipment. So, it’s kind of been an evolving relationship.   When they’ve had a problem, we try to come in and help them address that problem and help them resolve it,” Peterson says. “Georgia Tech’s been involved with Super Lawn technologies for about nine years and we’ve seen it progress over the years. It started with just simple design of the ramp and has now progressed to the design of the whole electrical control system, the recharging system for all of the electrical equipment, (and) the solar panels on the top. It’s been a great partnership; something that has developed-as they’ve grown, our partnership has continued to grow.”

At the Green Industry Expo 2017 in Louisville, KY, lithium was already putting out the gas fire. Battery power marketing is now leading the charge for nearly every major player in the lawn and landscape power tool industry.  Blowers, pruners, riding mowers-even a complete Super Lawn Technologies truck system designed to run solely battery powered lawn and landscape tools.  Batteries are topped off during the day by the sun.  Solar panels fixed to the roof of the truck harness enough energy to recharge the batteries on the truck keeping a three-man crew energized all day.

“I usually will switch a battery out and when I get through with the job just come back on the truck, pop it in the charger, you know, if it’s got less than two bars pop it on the charger it’s got more than two bars it’s usually good for another job.”

In nearby Biloxi, The Turf Masters company quietly deploys their fully electric battery powered arsenal of lawn and landscaping power tools complete with Super Lawn Technologies Solar Mobile Charging Station, at some of the best landscape maintenance accounts in the region.

“We’re not trying to get you to do anything else but replace that gasoline and the foreign oil. We just want to get away from that all together and use the clean power of the sun as well as electrical power from your home or your office. What’s going to happen is you’re recharging batteries during the day as you use up the batteries in your hand tools. You will then be able to return home to the shop in the evening and just plug your truck in allowing you to recharge the robust battery system underneath.

“As long as you keep your batteries charged, you can run all day.” Sword says, “I haven’t had any issues with not enough power or not enough battery life. That’s what I was worried about. But I haven’t noticed any difference. It’s about the same.  I was worried it was going to take longer not having enough power to do what I needed to do but everything works just as good or better as gas.”

In a partnership with Super Lawn Technologies, Greenworks Commercial, a leader in the Lithium Landscaping power tool revolution, has supplied Turf Masters with nearly $6000 worth of battery powered tools…putting them through the rigors of real world, everyday work. They’re joining a small group of beta testers on the front lines of the Lithium Revolution.

Referring to how well the battery powered tools stack up against gas, Sword adds, “I’ve used them and I’ve used (them) pretty rough and I haven’t noticed anything after we run through them hard all day. The next day I can just grab them and go. I haven’t noticed any difference with them being a compromise at all.”

Aside from being quiet…and cool, 82v Lithium battery powered lawn and landscaping power tools are inexpensive to run…very inexpensive.

Harvesting energy from the sun by adding solar charging can lower those costs to close to zero. Energy is free when you can capture it from the sun.

Then, there is the noise. Gas begins to clock in at 95 decibels and then revs up to a screaming 114 decibels; as Loud as a rock concert. Human hearing can be damaged at 85 db. Electric power doesn’t make a sound when not in use and hums at a quiet full throttle of around 94 decibels.

All of these factors weigh heavily in favor of making the switch as early as possible and joining the Lithium Revolution.

If you are considering battery-powered lawn equipment in your lawn or landscape company, watch this video.

Table of Contents (times correspond to the start of each topic):

3:20 – Frustrations that pointed the way

13:40 – What the employees think about electric equipment

15:40 – What we wasted money on in this transition

17:59 – Summary of the Electric Transition 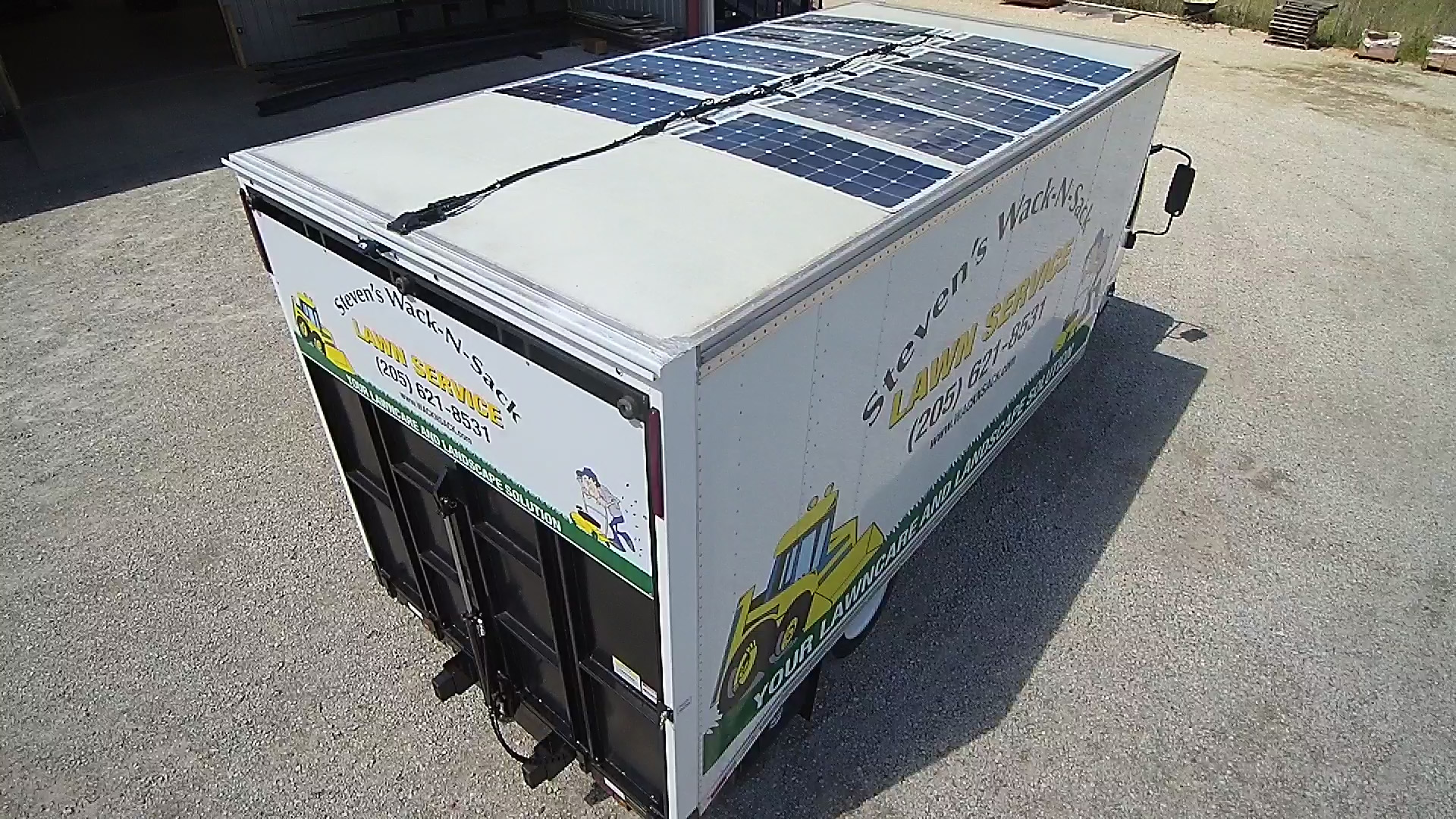